ALL I KNOW ABOUT PIE CRUST
Enough requests have come in since my return to warrant another good old-fashioned pie crust lesson. I am going to begin at the very beginning so you, who know all about this American delicacy, take a vacation today. I am betting every one of you are reading it, however.

When you choose your ingredients and measure them carefully as you do for cake your piecrust is going to become as standard as cake is becoming, thanks to the efforts of several flour companies that are interested in selling their wares.

Let’s go back to our subject flour. Soft or winter wheat flour makes a more tender crust than hard wheat flour. In turn, I believe that hard wheat flour properly handled makes a more flaky crust than soft wheat variety. So make your choice and then follow directions carefully. Soft wheat flour has become a problem here in Tulsa right now. There are only two brands in town that can be used and double check with the store grocer because they can become rancid over the summer. Your nose is your best guide as to rancidity.

In your choice of fat, lard varies in its moisture content while the cottonseed products are definitely standard in this respect. So make up your mind as to the kind you are going to give directions for a flaky crust as that is the least understood by the average person.

How It Is Done
Directions: In a round bottom bowl, put one cup sifted flour. Add one-teaspoon salt and 1/3 cup hard fat. Using either two knives or a pastry blender, cut the fat into the flour leaving it in pieces the size of a large pea. Do not use your hands if you want a flaky crust, you cannot help but get it too fine.

If you are using soft wheat flour, measure out two and a half tablespoons cold water. If using hard wheat flour, measure out three tablespoons cold water. Using your spatula or knife, never a spoon or a fork, all the water a few drops at a time, tossing it up from the bottom and cutting through at all times just as much as you please but never stirring.

This mixture will appear dry to you, perhaps, but do not add another drop. Turn it out onto a waxed paper and with the hands on the outside of the paper, with three firm pressures; shape the dough into a ball. Wrap closely in the waxed paper and put it into the refrigerator but do not lay it directly on the ice or on the coldest area of an electric refrigerator. At the end of an hour, the whole mass has become a damp ball. You may keep it a day or a week, just so you wrap it closely enough to keep it from drying out. You may use it without keeping in the refrigerator but it will crumble and be hard to handle.

I do not think that it is particularly good taste to again rave about the use of a waterproof canvas to resist sticking, as you all know that the only one of its kind on the market is my product. But please believe me when I tell you, I would enthuse about it more if it were yours. The use of canvas for pastry making is not an old idea at all. One of my oldest cookbooks, a German one, suggests using it. It works fine until washday when you wish that you had never heard of a canvas for pastry. So, one day when I felt progressive. I waterproofed mine that happened to be clean and presto! From that day on, it did everything that a well-behaved canvas should do.

No Crust Worries
The point is with the canvas, you have no worries about your crust sticking and being spoiled with excessive handling and the addition of the extra flour that is necessary to handle it. However, if you are not yet converted to its use, go ahead, take the amount of flour that you need, put about 2/3 of the dough on the board and beginning to roll from the center, with gentle but firm strokes shape it as near round as possible.

The next step is to make unusually flaky piecrust. The canvas users can do it with no trouble and if one of you find that you are clever enough to do it on a board, call me up and I will give you a demonstration job the next day, because you are good. You have it rolled out now, not too thinly. With your spatula, spread about one rounding teaspoon of fat over entire area. Fold the right third of the dough over, then the top third down, the left third over and the bottom third up. You know have about 10 thicknesses of dough separated from each other by a layer of fat. Very gently, begin to pat with your rolling pin so as to distribute the air and anchor the various layers to keep them from skidding as you begin to roll. Roll out a little thicker than you want it to be ultimately.

Turn your pie pan upside down and use it for a pattern. Cut a circle about one inch larger than your pie pan all the way around. Remove pan and carefully pick up the excess dough. Do not wad it up. You were very careful to make it in layers, so keep it that way.

Roll It Thinner
Roll the circle a little thinner. Fold the one half over the other half and place it over one half of your pie pan. Do not attempt to stretch this crust; it is not that kind of crust. In fact, chug it down into the pan a little, being sure that it fits into the pan loosely. You have a definite amount extending beyond the edge of the pan. Turn it under like the first turning of a seam, to the outside edge of the shoulder of the pan.

Now, put the thumb and forefinger of your right hand together, insert the tip of your left forefinger between the two. Isn’t that a perfect fit! Now, do the same with the folded edge of the dough between the fingers of the two hands and you find yourself making a perfect crimped edge. Then, pull the crimped edge well over the shoulder of the pan so as to avoid having it fall into the pan as it bakes.

Chill the dough covered pan, as is, about 20 minutes. If you are going to use it for a shell, with a table fork, pierce the crust every inch all over. Pop it into a 450-degree oven and bake until done. Watch it and if it still balloons up, pierce it just once with the ice pick.

The Two-Crust Pie
If you want a two-crust pie, chill the lower crust. During the chilling roll out the rest of your dough, spreading it with fat as before, folding and rolling cutting out with another inverted pie pan the same size as the one that you are using for your pie but cut the dough the exact size of the pie pan. Decorate it up with any design you please just so that you have steam vents. Adjust over the filling in the pie. For my own pies, I take a knife and just poke it down around the edges leaving it loose. Of course, I always have a juice line around the outside. However, if you are a tidy soul that likes your juice kept in using your fingers as told in detail above again, crimp again around the folded edge of the pie including this top crust.

Do you see that you have no chance for a leak in this pie? No matter what kind of a pie it-is, put it into a 450-degree oven for about 25 minutes, then reduce the heat to 350 degrees and continue baking until done, the test of which will vary with the type of pie.

Before putting pie in oven, pat the top with cream or milk and sprinkle lightly with sugar to get that rich shiny brown hue. 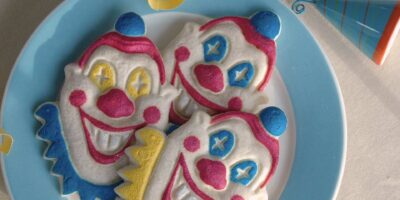